granite. AXIS MUNDI, Antonio Mendes. Large standing stones are usually though of as male symbols. This one has a pool, a female symbol, on the top. As an endocrinologist, I found this interesting. 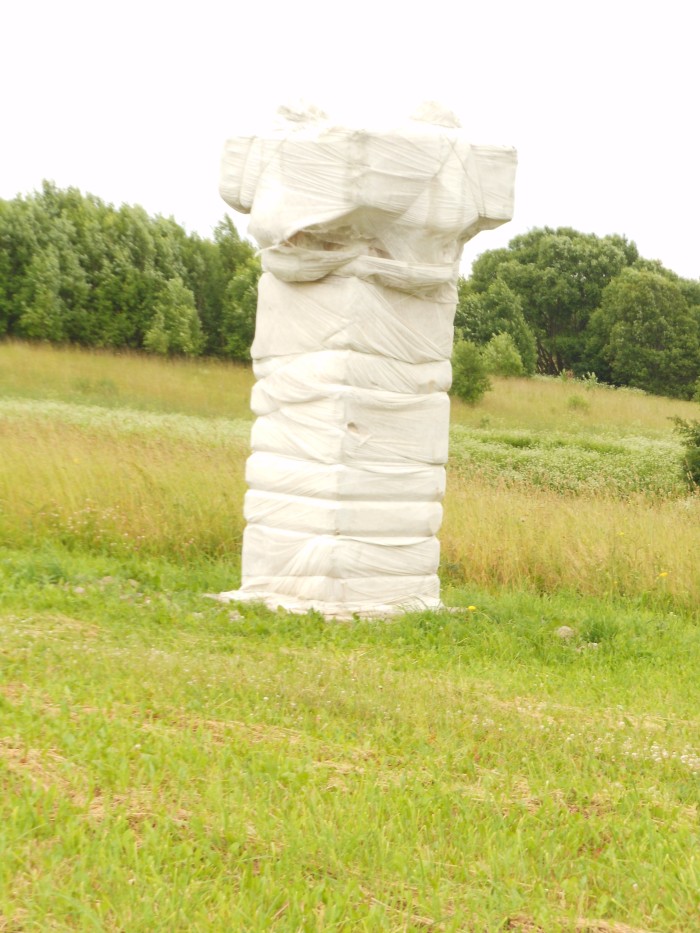 Nest of Wind, by Indulis Kalnins 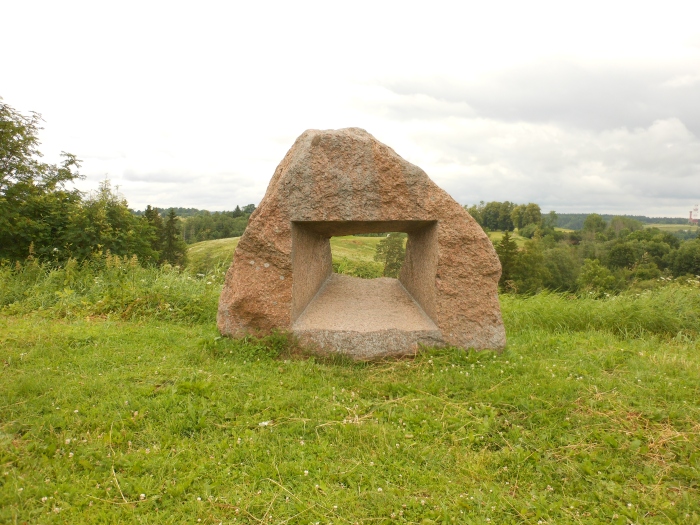 This was shot from a distance. This is the remains of “Inner Flame”, a fire performance by Ryan Hoover and Kerin Kozycki. 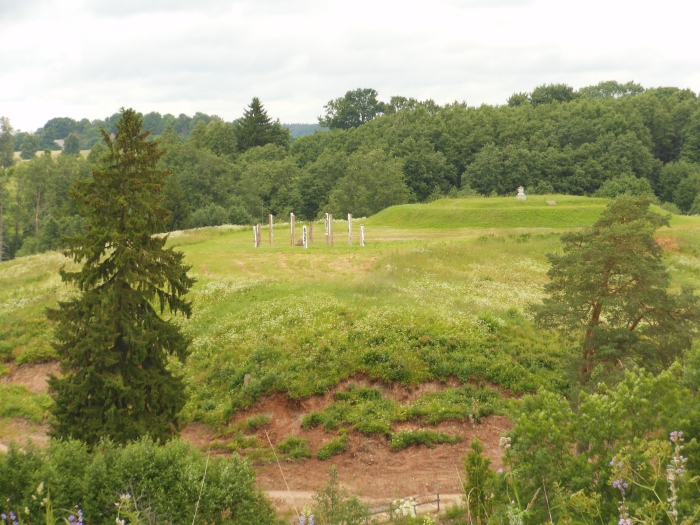 This is a view across the Rumbuilte to Brinkpedvale. This is Ben Billingsley’s work. Spirit Trees. timber, woodcut prints, wheatpaste This is a great site, that looks like it could have been a hillfort, but it was not.

this is Jiso, wearing a wreath for the solstice. Sculpture by Thomas Matsuda.

The Universe Exists, by Ilmars Blumbergs. These trees circle the top of a small hill. There are other circles like this in Kurzeme. A good place to meet and sing. 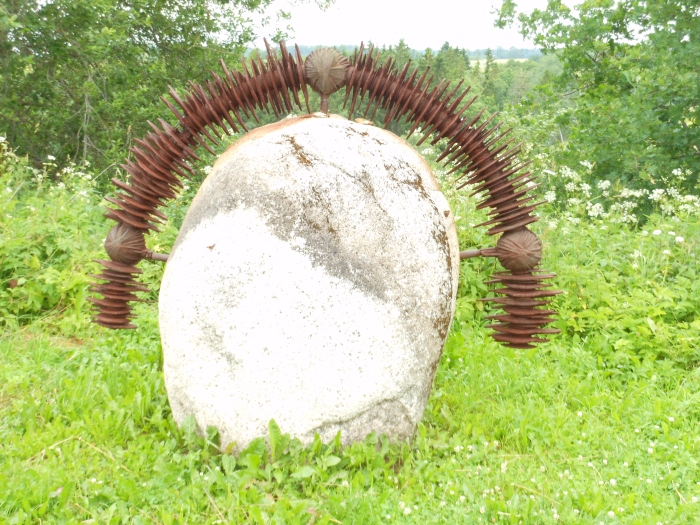 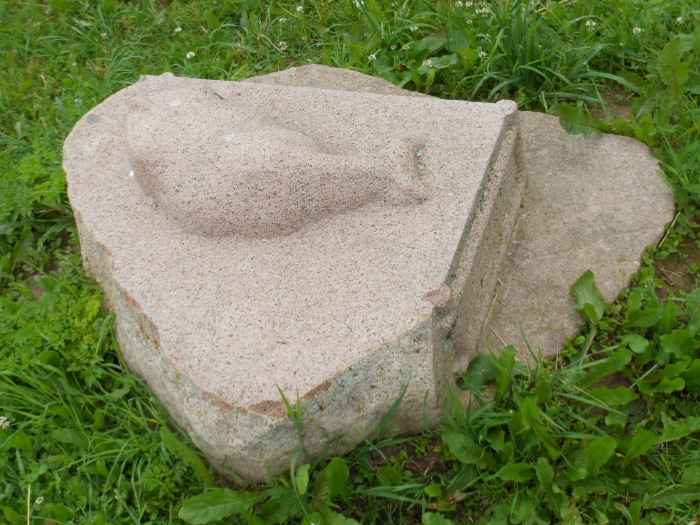 Some Japanese whaling villages have carved memorials to the whale fetuses that never got to swim. 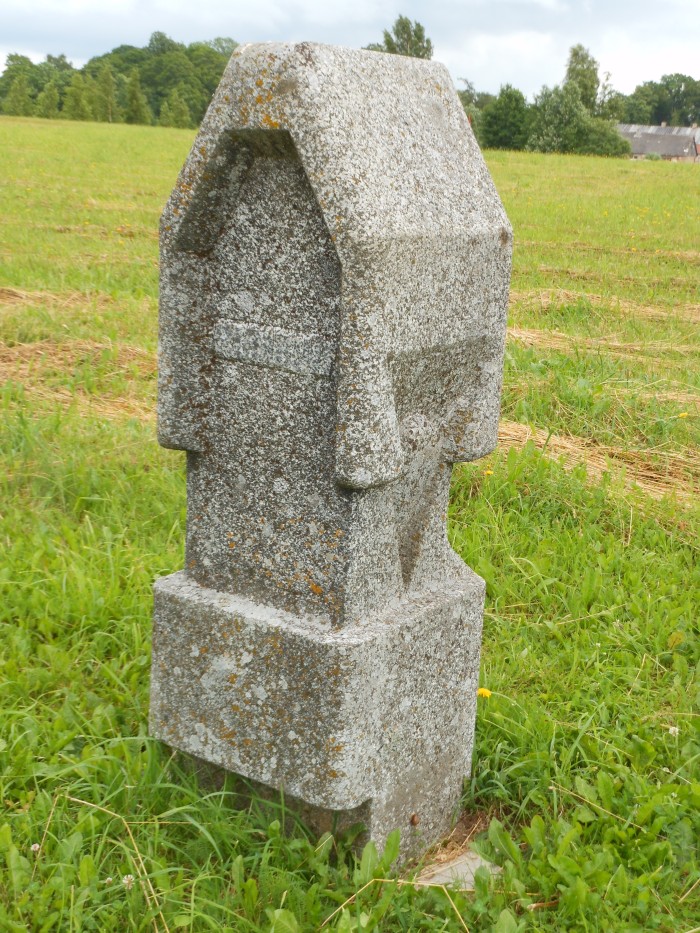 iron sculpture on granite base

Kiyomizu by Thomas Matsuda. A small pool of water collects in this carved granite boulder. 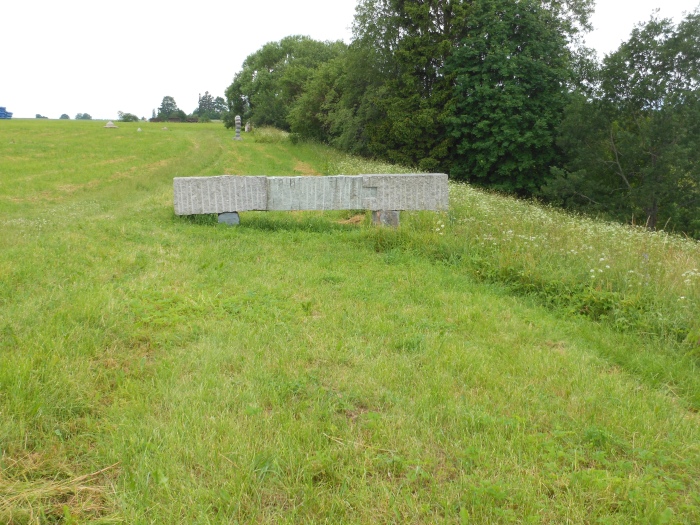 Crossbeam, by Mindaugas Navakas. This brought back memories of ArtPark, in western New York.

Third Planet From the Sun, by Karlis Ile. This was a fire performance constructed of rebar and stone. This was original packed with sticks, straw, and other flammables. The solstice fire is traditionally elevated, and it sheds blessings as far as its light can spread. After it was ignited, the small spherical boulders could roll down the cone and into the tube, scattering sparks as they fell.

This one reminded me of a two-man saw.

The Makeover, crochet and granite fiber art by Liga Zimante 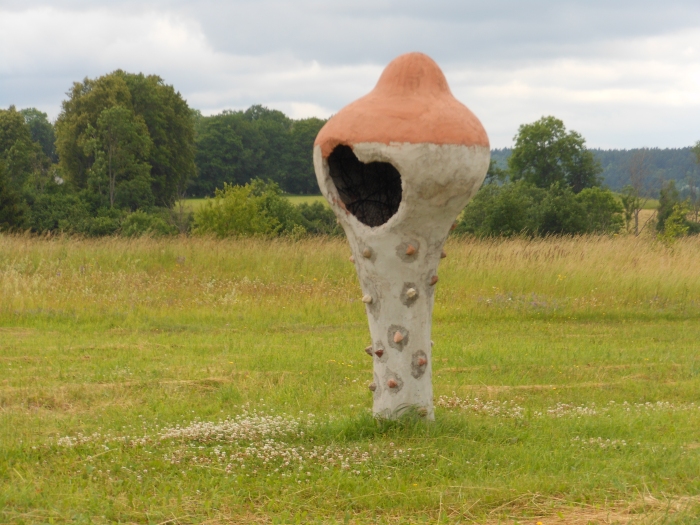 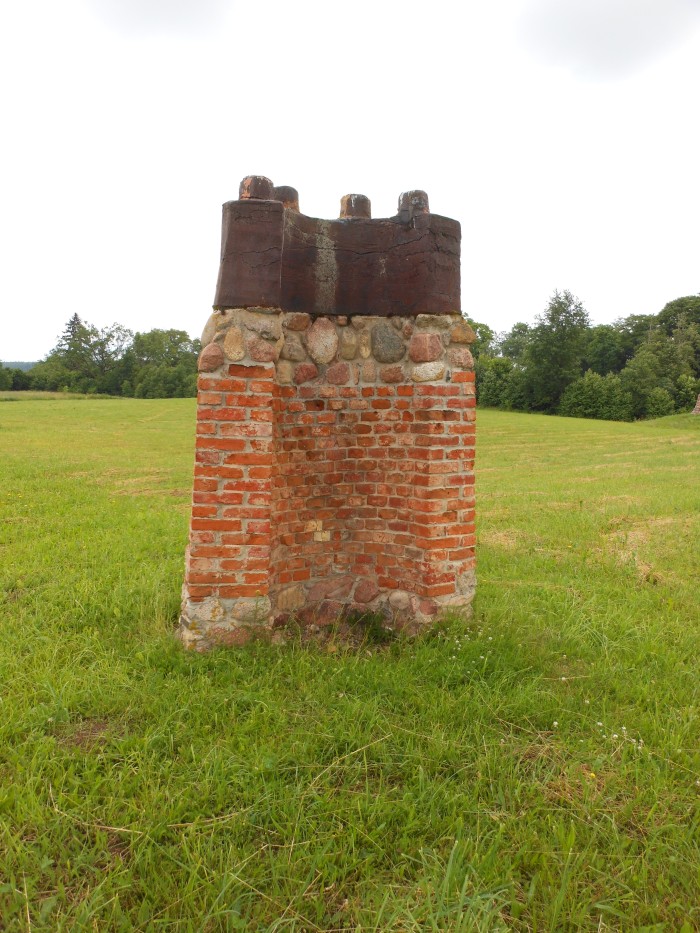 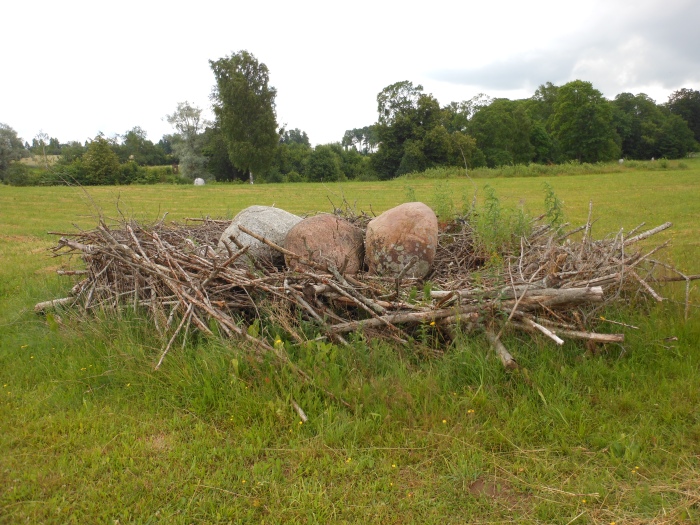 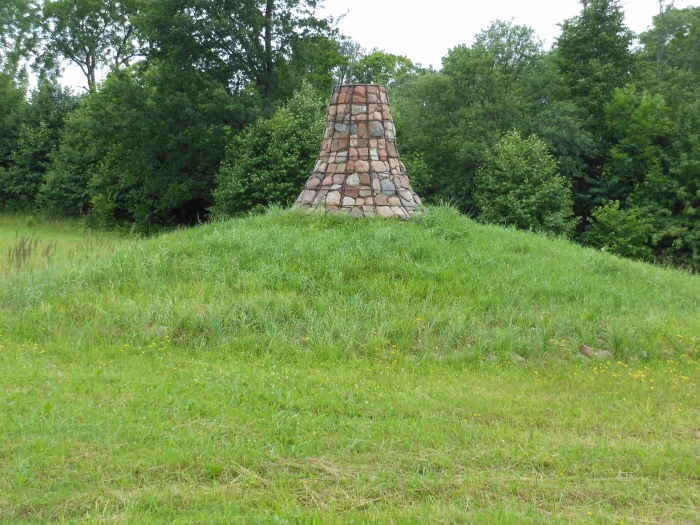 The Rim of the Volcano, Hanna Joddi. stone, iron, and earthwork 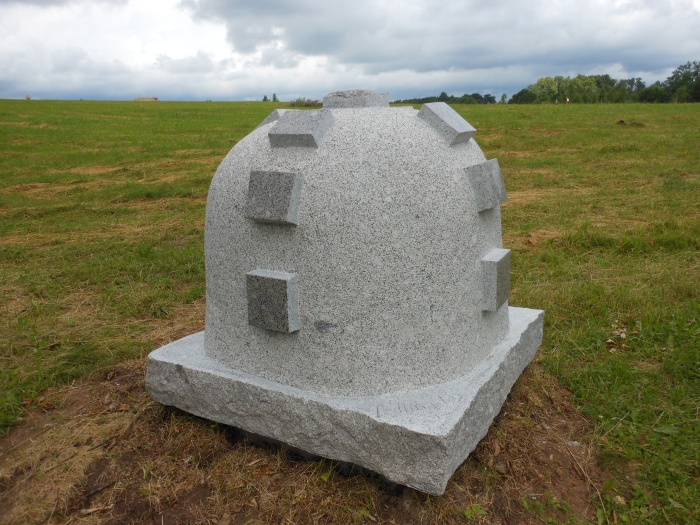 MUNAMUNA by Villu Jaanisoo. Quit watching TV, and go out and do something ! Yes, this was constructed using old television screens. 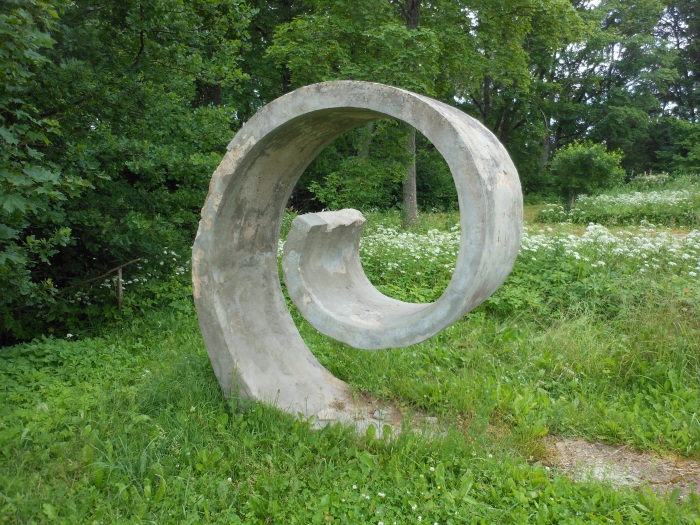 “The Path, by Karluis Alainis. concrete. This sits at the end of a wall foundation that is about 100 yards or meters long. I suspect that the wall was very old.” 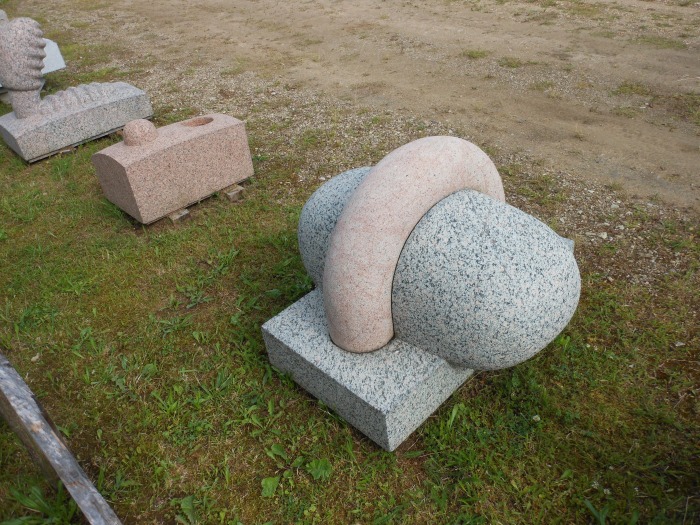 Ojars Feldbergs. This reminded me of stones with holes in them, used in swearing ceremonies. A person would but his arm in the hole, and awear that something was true, with the idea that the stone would close around his arm if it he lied.

an interesting feat of stone carving

This one reminds me of a feature at Machu Picchu.

granite boulder with holes. This is a mirror image of my Tunguska

I think that this is Ojars Feldbergs’ work. Most of the sculptures are not as representational as this 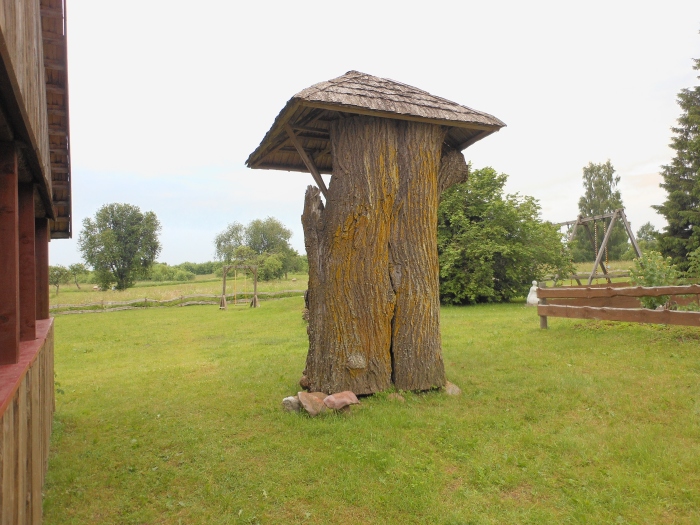 This is the trunk of a revered linden tree, damaged in a storm in 1991. The stump is fenced, in hope of a new tree springing up from the old roots. Trees grown in the open have a different shape than trees grown in the forest, so you can tell what the first tree in the area was. If it dies or blows over, a new multi-trunked tree can grow from the old roots, a symbol of resurrection.