I was a symposium sculptor at the Iron. Stone Symposium at the Pedvale Open Art Museum this year (2014).  The artists chose their stones from the available boulders on site. This was not a problem, as each artist had specific types of stone in mind, and none of us chose the same stone.  Thr photo above is one of the first stone that I chose. The stone is about human size, and symmetrical, flat on the bottom but rounded on the top when standing upright, has large crystals, and it is red.  This fulfills a sculpture maxim:  “Make it big, and if you can, make it red.”.  I presented my choice to Ojars Feldbergs, the director of Pedvale, only to hear him say “There may be a problem using that stone.”  It seems that the stone may have had “cup marks”, which are ancient man-made dents in the stone.  If so, the stone was then part of Latvian national heritage, and could not be carved.  An archaeologist would be called in to verify that these actually were cup marks.  It seems that there is an ongoing conflict between sculptors and archaeologists over granite boulders.

This is a photo of one of the suspected cup marks. I did some reading on cup marks in the Baltic area.  Cup marked stones tend to be symmetric, with large crystals.  Most are about the length of a person, and about one meter tall when lying down.  I could not find any mention of rock color, but it looked like my stone fit the pattern fairly well.  It was nice to know that I had timeless taste in picking the stone.

Cup marks are man made indentations in stones.  The first ones described in the Baltics were in the 1800’s, during the Romantic Era.  It really is not clear who carved them, or why, or when.  There are several theories, including being made as offerings or as places to grind medicines or pigments.  One of the artists who had examined cup marks in Scotland said that he wasn’t sure that these were really cup marks.  There is always the problems of erosion, accidental stone damage, or other causes to confuse the process of identifying true cup marks.  The photo above shows an accepted cup mark.

Devil Stone of the Abava

Boulders are taken very seriously in Latvia, particularly those that geologists would call large glacial erratics.  They are often called “devil’s stones’, and have stories attached to them about how they were carried about at night by the devil, who had to drop them at sunrise, or when he heard a rooster call.  This is a photo of the Devil’s Stone of the Abava.  It was being carried by the devil to dam the Abava River, but was dropped in the usual manner.  It has its own park, and a small cave nearby is called the devil’s cave.  Such boulders are respected in their own right.  You do not see grafitti or vandalism on these stones. They are also said to move, and any geologist can tell you that they did move with the glaciers, but they also continue to move downhill by frost action.  They are treated as individuals that you do not want to mess with.

Regardless of what the archaeologist said, I could not use this stone in good conscience.  I found this other stone to use, which was a bit more rustic in that it was less symmetrical.  It did not have a flat bottom, but when partially buried, it appears to have one. I set to work with my assistants.

I completed my sculpture without using this possibly significant stone.

So what did I do?  Did I preserve some ancient work?  Did I mistake some natural phenomenon for the work of humans? Was I fooling myself abou the cup marks?   Or did I frustrate some Neolithic artist, who would have enjoyed collaborating with a 21st century sculptor? 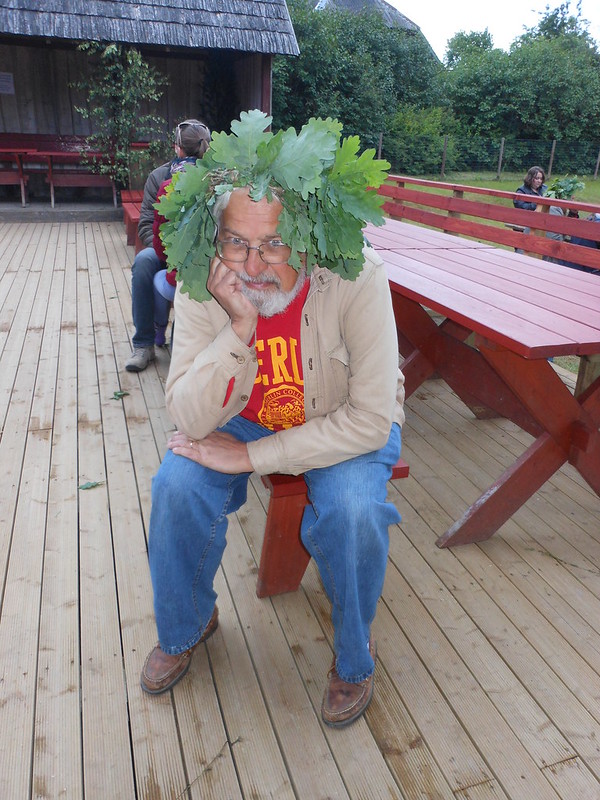 3 thoughts on “My recent experience with cultural resource management”